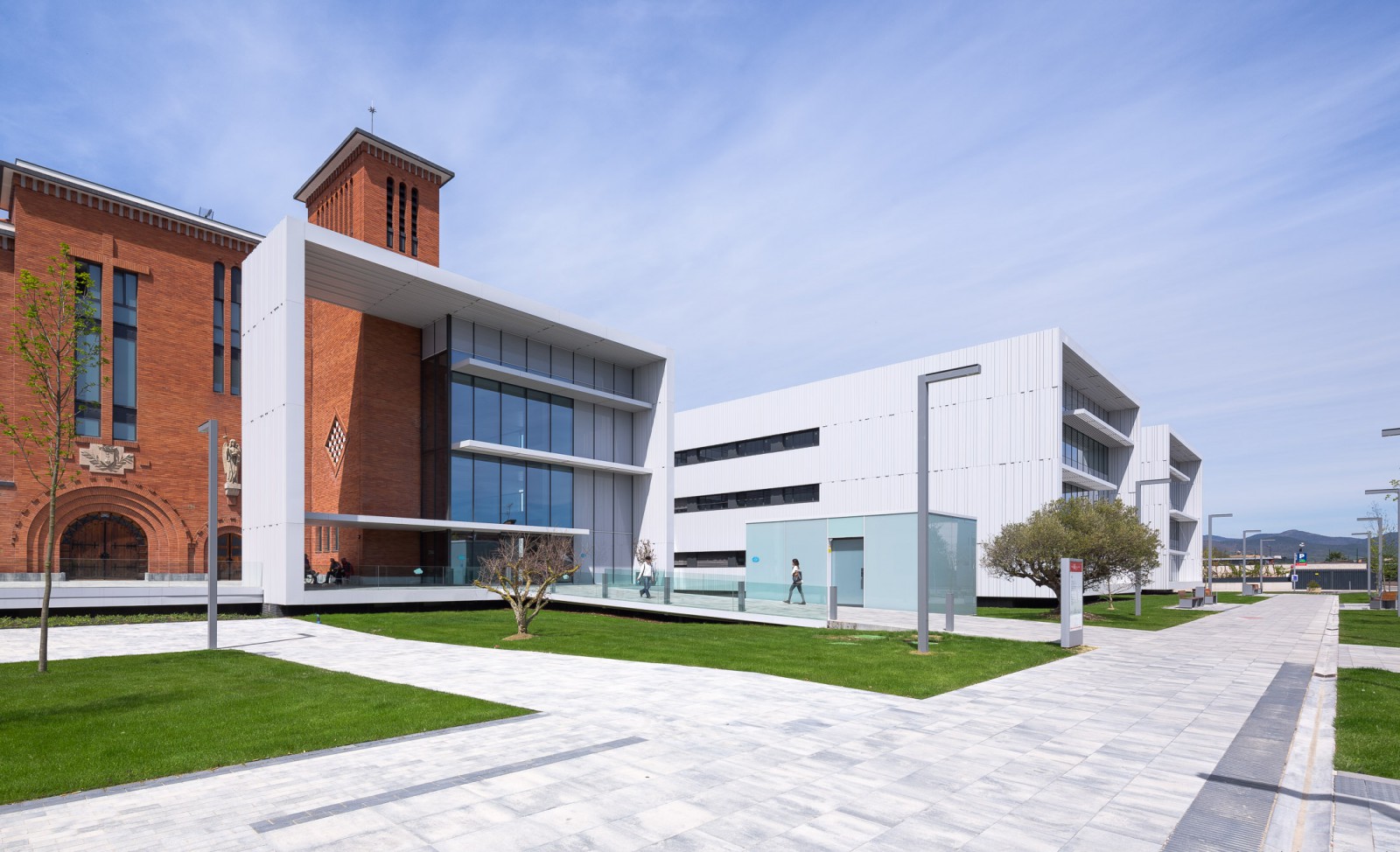 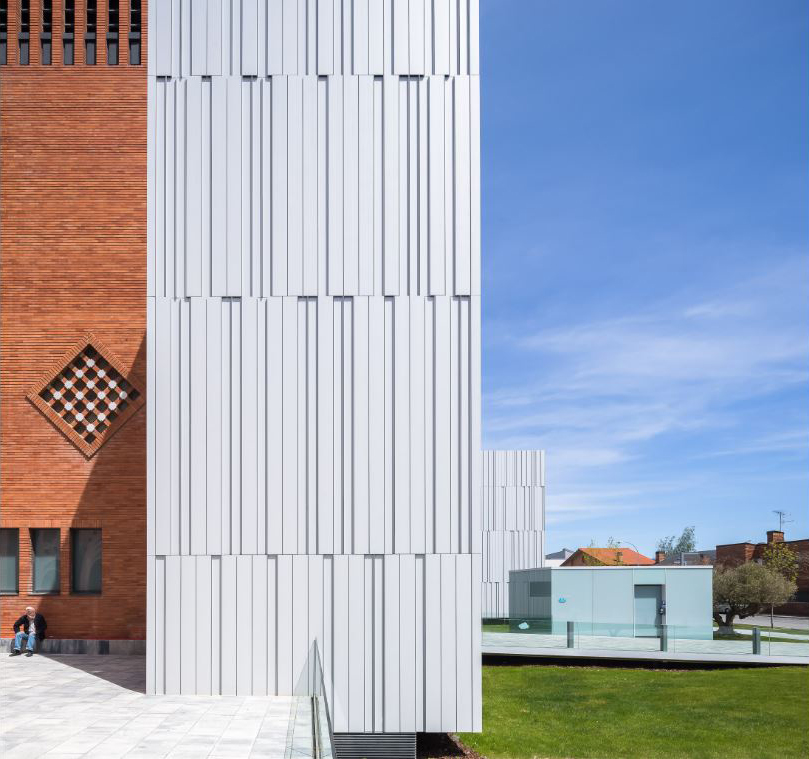 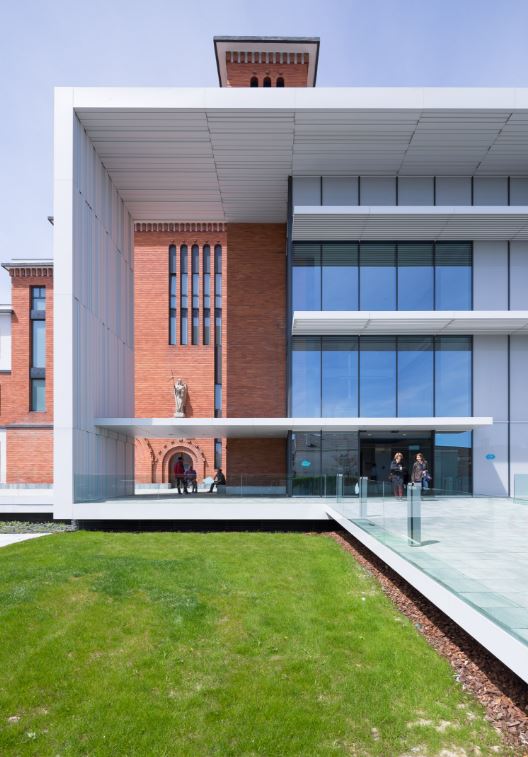 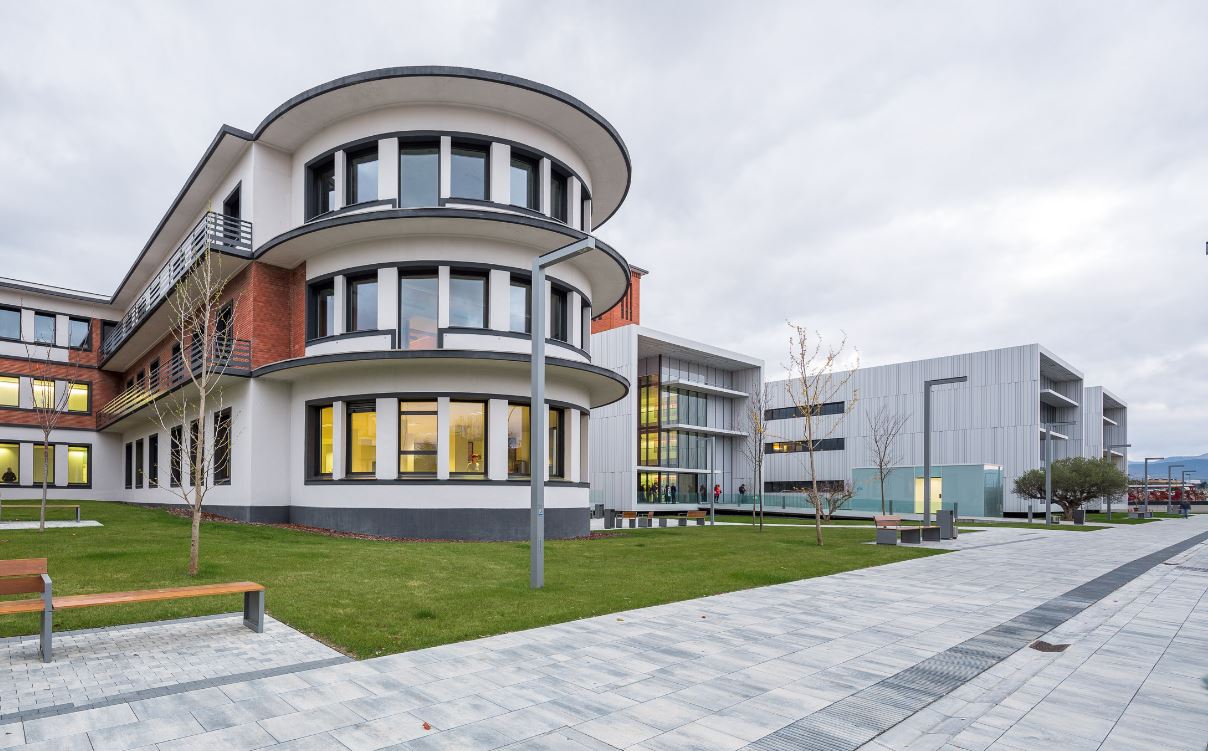 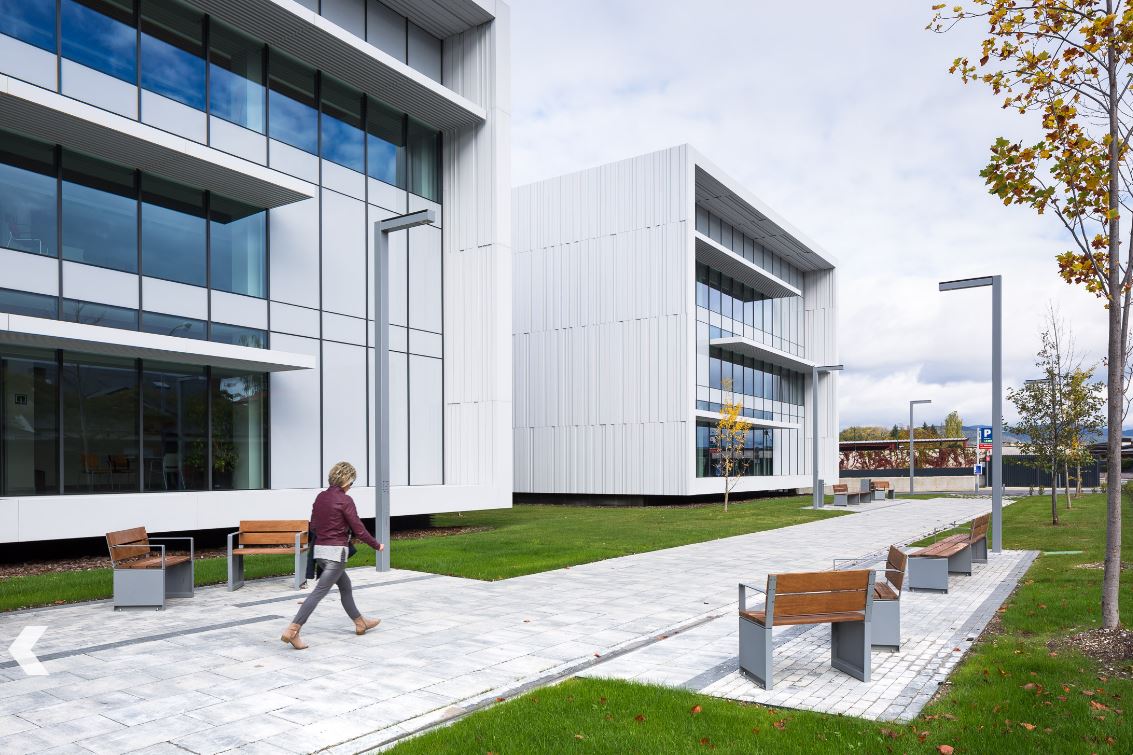 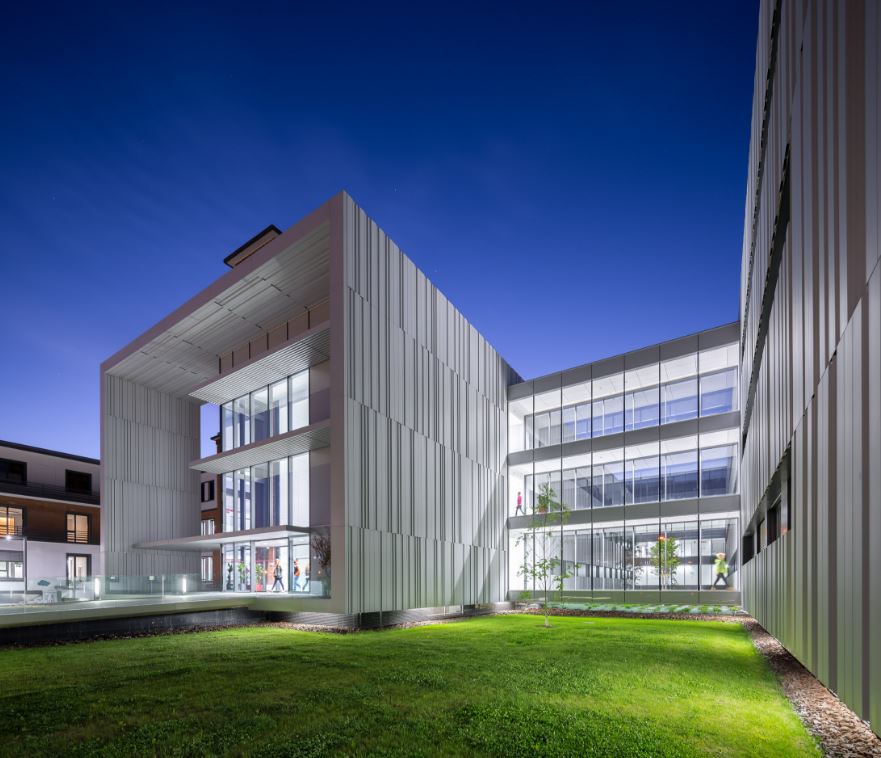 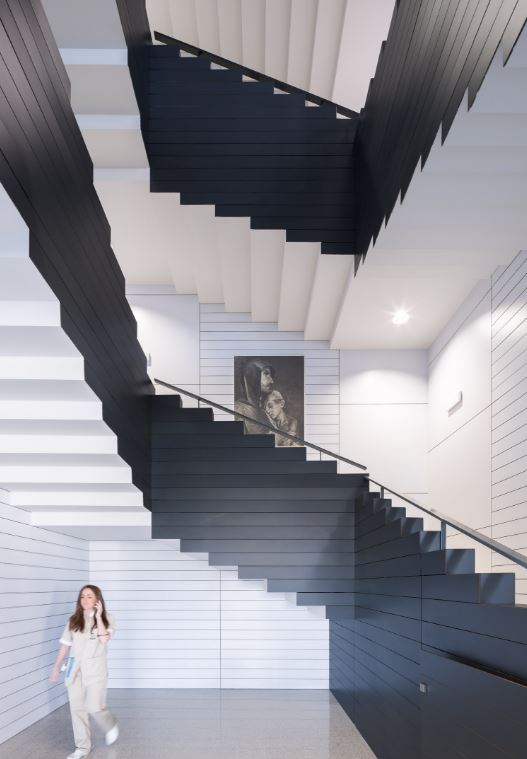 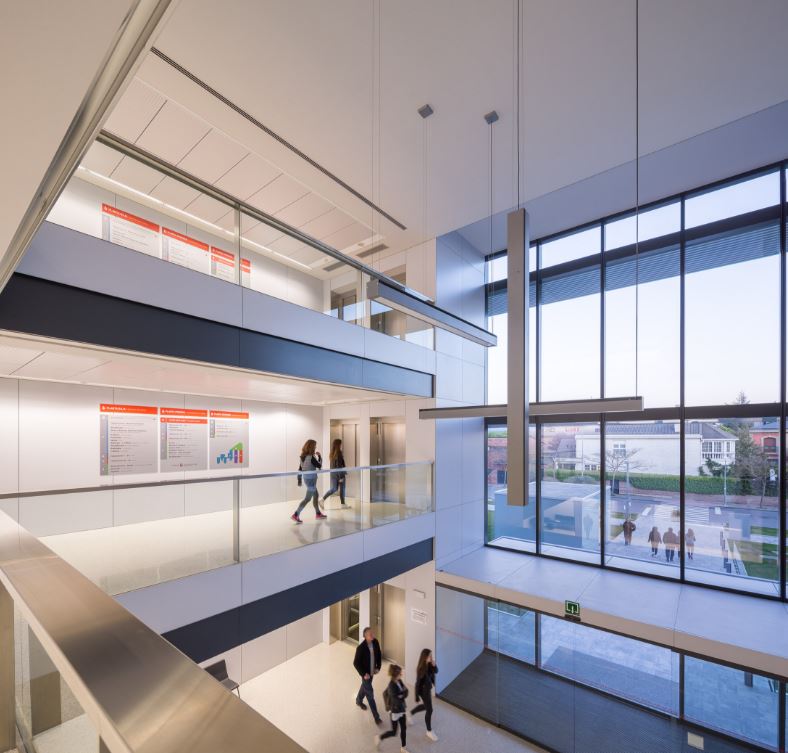 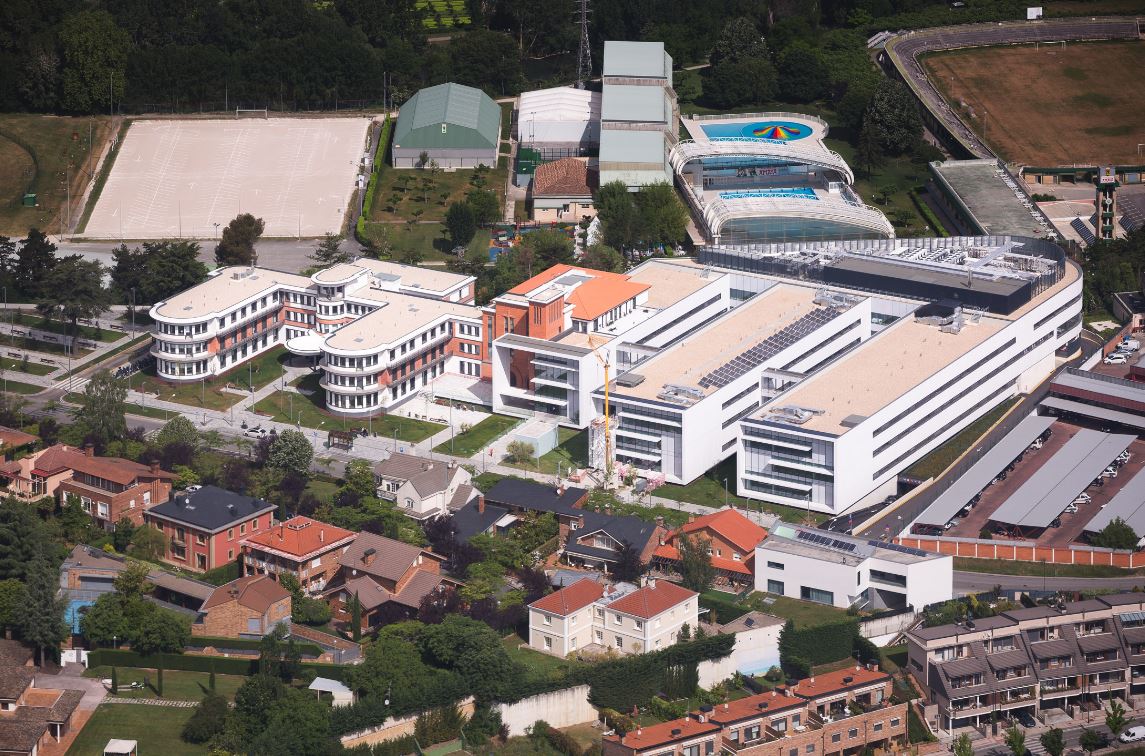 Update of the values ​​of the original building with a contemporary treatment, integrated in the architectural and urban preexistence.

Update of the values ​​of the original building with a contemporary treatment, integrated in the architectural and urban preexistence.

The refurbishment and extension of San Juan de Dios Hospital has been carried out over a building designed by Víctor Eusa in 1935. It was completed in 1943. This modern landmark originally consisted of a main axis and two wings where the architectural program was developed. In the south of this comb figure hospitalization units were placed, holding the main entrance between them. In the north, opposed to the south void, the obstetric unit and the chapel almost completed a third wing. The east-west axis ended against a cloister containing a residence for friars and several other support facilities surrounded by garden areas.

This building by Eusa is clearly influenced by Central-European rational expressionism and it can be seen in the delicate brickwork or in the composition of the volumes, resembling some of Dudoks’ works. The hospital was located outside the urban fabric of Pamplona, over a promontory overlooking the plain of the Arga River, the old town with the cathedral towers and the distant landscape.

As years passed by, the original design was slowly distorted. The enlargement of the hospital program caused important dysfunctions. Increasing incidence of cars and other means of road transport had the effect of replacing garden area by parking area and thus deteriorating its image. Finally, the expansion of the city enveloped the hospital in a low density residential neighbourhood.

Considering all these circumstances, the architectural project is aimed clearly towards the recovery of the original values of the building. First, recover the old plan criteria, based upon a framework of movement axes, enables a harmonic image of both the new and the refurbished building. This general framework also allows a displacement of the relationship between building and its urban surroundings towards the forefront sides of each block the same way it happened in the original building. Second, the comb shaped plan has also a positive impact in urban landscape and building image because the perceived volume is much smaller than the real one. This was a key point in the new design because of the low density and mainly single family house area in which the hospital is now located. And third, once the forefront of the plot would become free of the parking space, the hospital is understood as a group of pavilions surrounded by garden areas. In this, the new ones will appear to float over the grassy soil, while the former ones emerge from it. Those garden areas are used as a leisure park for patients and families, with its own pedestrian streets and squares.

A historical research on pictures and elevations of the former building shows both a will of reinforcing horizontal lines and a graceful expressionism in the use of brick walls combined with framed windows. Unfortunately, these values have been lost as time has gone by. Several decisions were taken in order to recover that initial appearance. The added sloped tile cover was eliminated, dramatically changing (and improving) the image of the building. The relationship between brick walls and plane mortar surfaces is highlighted just by a proper use of colour. Old hand railing is also removed and substituted by a new one, specially designed after studying other Eusas’ works of the same period.

As for the extension, it was designed a new aluminum profiled sheet covering which combine two different profiles in order to create a vibration over the façade. This vibration is similar to the brickwork of the old building and is accentuated by the apparent lack of upper, bottom and side ends. This way, raw tectonic of these profiles is shown but several other effects are accomplished. It can be perceived a horizontal outline equivalent to the one seen in the building by Eusa. Besides, the building obtains a great expressive strength, paradoxically linked to a certain amount of brightness which eases the great volume of the new wings to don’t overcome its surroundings.